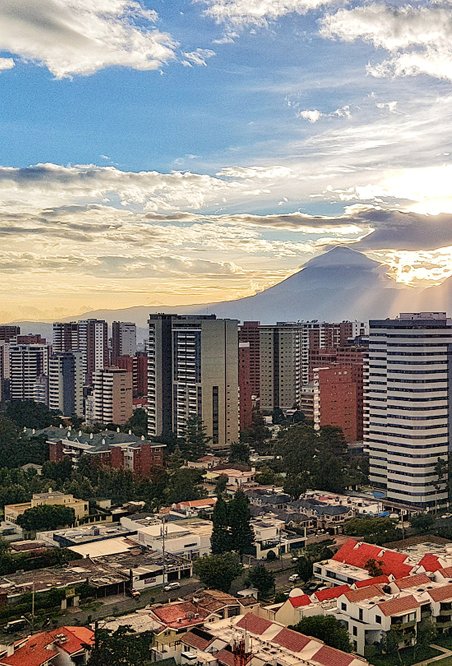 Guatemala (from Nahuatl: Quauhtlemallan, "place of many trees"), officially the Republic of Guatemala, is a sovereign, free and independent state located in the extreme northwestern corner of Central America. Politically, it is a democratic and representative republic organized for its administration in 22 departments. Its Latin American culture is varied; its extensive indigenous culture is the product of the mixture of Mayan and Spanish cultures during the viceregal era. It is the most populated country in Central America, with 16,301,286 inhabitants according to the census carried out in 2018.8

Despite its small territorial extension, Guatemala has a great climatic variety, result of its mountainous relief that goes from sea level to 4220 meters above sea level. This means that in the country there are ecosystems so varied that go from the mangroves of the Pacific wetlands to the high mountain cloud forests. It limits to the west and north with Mexico, to the east only an adjacency line with Belize, to the southeast with Honduras and El Salvador, and to the south with the Pacific Ocean. The country has an area of ​​108,889 km². Its capital is Guatemala, officially called the same name as the country.

It is a multicultural and multilingual country, the official language is Spanish, although there are twenty-two Mayan languages ​​and also the Xinca and Garífuna languages ​​spoken usually in the Caribbean department of Izabal, which are considered in ‘danger of extinction’.

The territory where Guatemala is currently located is part of Mesoamerica and in it the Mayan culture began to develop, which is why it is known as the 'heart of the Mayan world', extending its Mayan and Olmec cultures to neighboring countries.